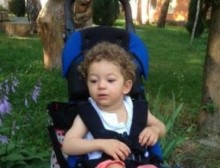 After several tests I was diagnosed with Tetralegia Celebral Palsy. When I reached the age of two I started having epilepsy attacks which were followed by days spent at the hospital which caused delays in my development. My last epilepsy attack resulted in intubation even after doctors spent two hours trying to stop the seizure.